While there are definitely some awesome custom jerseys being donned in the sports world (University of Oregon, anyone?) today, not every team has been able to keep it well-designed over the years, but they’ve done their best to keep it interesting. Even if a team has a streak of having some attractive uniforms, there’s always that one game where things get weird, and it’s usually one of the biggest games of the year.

With that being said, we’ve compiled a list of some of our favorite terrible sports jersey’s that we’ve seen over the past few decades that make us either laugh out loud or put our head in our hands.

5 Terrible Sports Jerseys of the Past 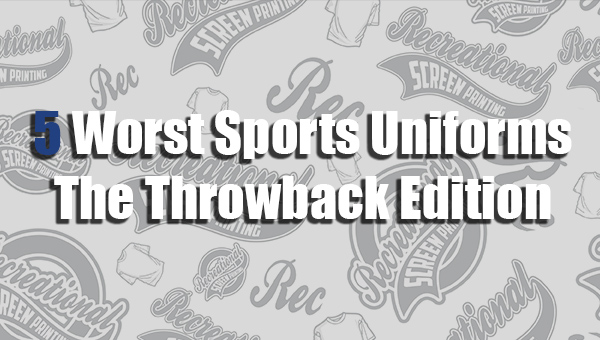 Hockey jerseys are cool; they’re cool for fans to wear as well as the players because there’s no other jersey that looks like them. With that being said, there’s definitely no jersey that will look like those of the Mighty Ducks of Anaheim. Of course, everyone was a fan of the Mighty Ducks franchise, but to have those reflected on the actual NHL team’s jerseys – it was a bad idea. It basically looks like if you threw a Jason mask from Halloween onto Daffy Duck.

The Broncos current jerseys are awesome. We love the bright orange with the deep metallic navy, but at one point they did something weird, They donned brown and yellow jerseys with socks that had vertical strips as a terrible compliment. No logo, no words, if you put them on a field without running a headline for the game, you wouldn’t know what team it was.

At one point in their history, the Atlanta Hawks had probably one of the biggest logos we’ve ever seen on a basketball jersey. The wings of the hawk were long that they stretched to the back of the jersey, and it was unnecessary to have the hawk holding a basketball – we know what sport you’re playing.

Oh, Canada. These are some seriously terrible hockey jerseys. Why are they so bright? If the goal of these uniforms was to distract their opponent mission accomplished because just looking at a photo of these uniform can induce vertigo. We can’t imagine what it was like to actually see that skating around you.

When you think the Philly Eagles, you think that deep forest green right? Well, that wasn’t always the case. They got weird once upon a time where their uniforms were yellow and baby blue – that’s right, baby blue. While we do like those two colors together, it just doesn’t work for an NFL team. Maybe a high school football team instead.

When you’re designing custom jerseys, you need to think about logo placement, material, brand, and the sport being played. Some of these aforementioned uniforms just seem like a few steps were skipped in an already rushed idea. If they just took a little more time, maybe they wouldn’t have landed on our list, but hey, not everyone can print the perfect custom jerseys all the time like we can at Recreational Screen Printing.